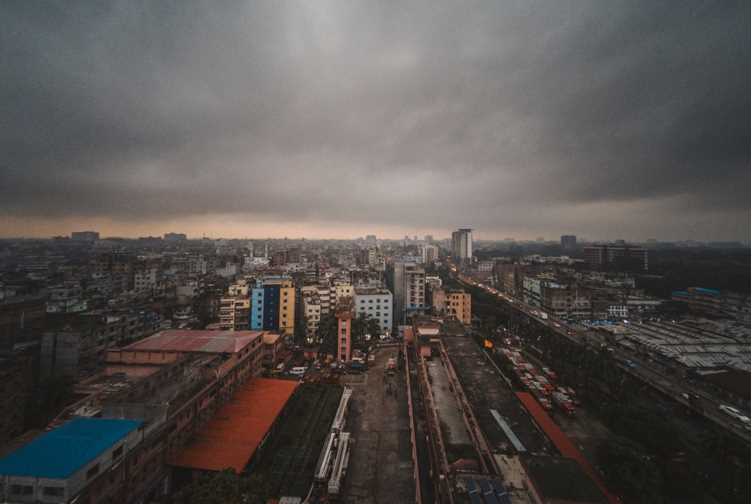 As the eighth-most populated nation in the world, it’s fascinating to consider the issues that face Bangladesh in 2022. Understanding the issues that other nations face is critical for us to develop an understanding of global issues – often things that may seem small to us at home.

Let’s explore some of the issues facing Bangladesh in 2022 – from more recent issues such as COVID-19 to more historical problems such as water supplies.

Wherever you may live, COVID-19 has had a major impact on the lives we live, whether it be work, health, or home. With coronavirus spreading to Bangladesh in early 2020, it has infected nearly two million Bangladeshis, resulting in nearly 30,000 deaths.

The impacts of COVID in Bangladesh have been well documented – with an estimated one million workers in the garment industry laid off due to a reduction in global demand for garments.

2. Typhoons and storm surges off the coast of Bangladesh

Bangladesh is well known for typhoons that generally strike through two storm seasons each year. Over the decades, these storm surges have resulted in major losses of human life, such as that of Tropical Cyclone Nargis in 2008, as well as the encroachment of seawater on agricultural lands in rural Bangladesh.

Disaster preparedness and preparation is an area of significant concern in 2022, and efforts toward disaster management remain ongoing and critical. Most Bangladeshis are working to bring themselves out of poverty – however, major tropical storms make that struggle even harder.

Ongoing attempts to build resilience, such as the development of cyclone shelters and strengthening river embankments, represent only a fraction of the ways that Bangladesh is addressing the risks of climate change in 2022.

3. Hunger issues and poverty in Bangladesh

One of the most pressing issues impacting Bangladesh is the prevalence of hunger and poverty, such as the inability to access basic staples such as rice. Approximately 20.5% of to population lives below the national poverty line, and 25% of the population is considered food insecure.

This food insecurity is exacerbated by issues such as natural disasters, and an inadequate level of land for agricultural purposes. When disaster strikes, there simply may not be the food available to feed families.

This is progressively being addressed through food programs and safety nets, which are improving hunger outcomes in Bangladesh. However, there is much more work that needs to be done in this space.

For those that are lucky to live in relatively wealthy nations, it’s hard to believe the impact that corruption has on nations like Bangladesh. While pledges have been made to address corruption, Bangladesh ranks as one of the most corrupt nations in South Asia, ranking ahead of only Afghanistan within the region.

One of the largest corruption scandals to have hit Bangladesh in recent years includes the Padma Bridge scandal. As a result of this graft, jobs and livelihoods have been impacted throughout Dhaka, Bangladesh’s capital city.

While whistleblowing and journalism are prevalent in Bangladesh, an increase in digital surveillance because of COVID-19 restrictions presents an ongoing challenge for those trying to address corruption.

As one of the world’s most populated nations, Bangladesh has many groundwater sources available for use. Additionally, the Ganges Water Sharing Treaty provides a significant water inflow to support uses such as agriculture.

Unfortunately, most groundwater in Bangladesh is contaminated, with 60% of the population only able to access water with high levels of toxic contaminants such as E. coli and arsenic. This becomes more pronounced during the summer storm season when excess surface water mixes with waste products such as septic tanks and latrines.

But it’s not all bad news.

While these issues may seem daunting, Bangladesh is relatively well supported at an international level. NGOs are working hard to improve outcomes and improve the livelihoods of these people, and are working towards the UN’s Sustainable Development Goals (SDGs).

This has resulted in many great improvements, such as a 40% reduction in maternal mortality between 2000 and 2010, and the construction of more than 240 cyclone shelters.

For those that would like to donate to Bangladesh, fortunately, many organizations are working to address the issues facing the nation today.